As the number of mobile phone users grows, cell phones’ impact on human life and health is ever more of a concern. On the other hand, cell phones provide us with the most convenient form of daily distance communication in human history. Growing usage of mobile phones let us direct contact to the device, for long time. There is no possible way of leaving cellular phones or drop them in modern life. We have moved to a new era of wearing mobile and particularly Smart Phones and to use it not only voice but also for internet too.

Mobile phones and, Bluetooth headsets that use radio waves as transceivers. Radio frequencies that carry the energy, give rise to changes in cell structure of human body. Cancer is also a disease result of changes in the structure of body cells. The report released by the World Health Organization (WHO)/ International Agency for Research on Cancer (IARC) in year 2011 had revealed that radiation transmitted by mobile phone is potentially carcinogenic to human. It indicates that malignant type of brain cancer associated with wireless mobile phone use. The report also indicates a solution to decrease the potential risk by using the Bluetooth hands free devices to lower the radiation exposure. 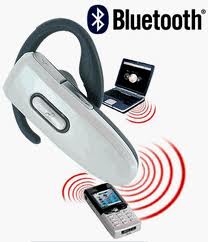 SAR (Specific Absorption Rate) is an indication of the amount of radiation that is absorbed by a unit of mass of tissue of a person. In other words, SAR is the value of amount of radiation absorbed into a head whilst using cellular phone. Bigger SAR values are more harmful to the body.
Bluetooth headset’s effect to human body is very small compared with the rate of cellular phones. Bluetooth transmitter and receiver run efficiently at distances of less than 10 meters. Cell phone base station antenna communicates with cellular phone hundreds of meters away. Comparing the distances of both wireless communications can make, mobile phones need more powerful radio waves to reach the base station antenna in longer distance. That means Bluetooth headsets need less powered radio wave energy to reach the base within 10 meters.
The Blackberry 9700’s SAR value is 1.36 W/kg, while a Bluetooth headset, depending on brand and model, ranged from 0.001 W/kg to 0.01 W/kg. So Bluetooth headsets are 100 to 1000 times less harmful compared to cellular phones. According to a study from Jabra Bluetooth headsets is 800 times lesser radiation than mobile phones. As the report from WHO indicated to use the Bluetooth hands free devices are essential to cut the risk of cancer.
Share